It would be great if you guys made a virtual version of your µFreak, since you make such great sounding virtual filters, and the rest is all digital anyway!

They went me one better!

The miniFREAK-V  killer feature you ask?

The hardware acts as a perfect control surface for the software version so you get all the realtime hands on control of a hardware synth, but the multiple instances of a plugin.

Normally, you buy a hardware synth and have only 1 ‘Instance’ as its atoms!, but… This one…

Buy a very VERY fun poly synth with an incredible array of oscillator types, and a CRAZY useful arpeggator / sequencer, and get a software version you can use in your DAW, giving you as many ‘COPIES’ as your cpu can handle.

More than two years ago,  I bought a µFreak, it is easily the most fun synth I’ve had in 30 years… but I had a few thoughts…

So, I had a conversation with the brilliant welcoming people at Arturia.

That ended up with me being quite deeply involved in the development of this absolutely superb instrument.

The Arturia miniFreak,  If your a synth geek, I definitely recommend checking it out. 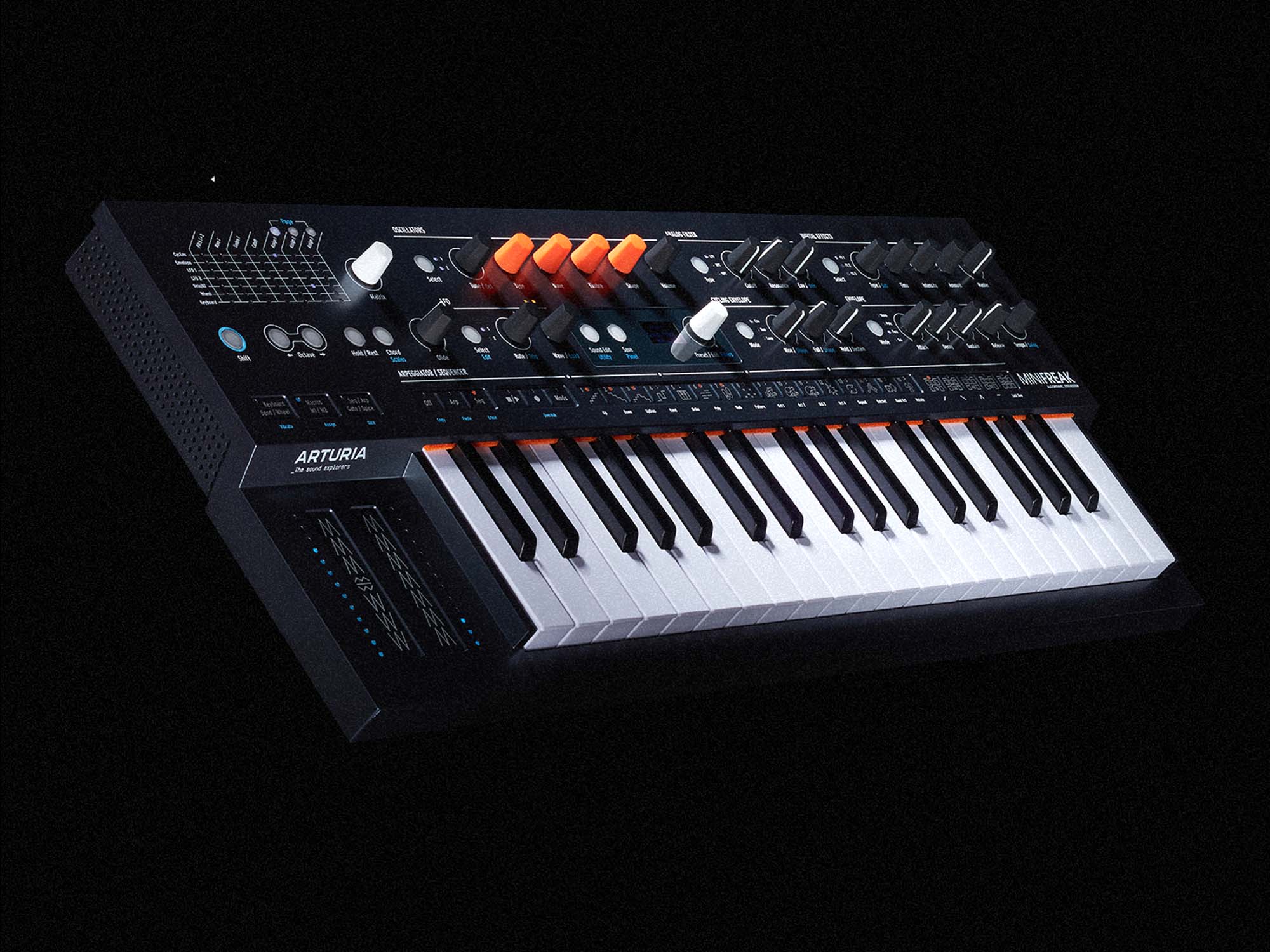 So back in1989 a friend (C Giles) and i did a STEINSKY inspired track, all done on a Tascam 4 track cassette, Ensoniq, SQ80, a DX7 and an Akai S900. We created a beat track, then performed the rest in live to tape then sampled bits of the radio news reports as it was coming in live.

The way the reporter was expressing totally justifiable fear, (understandable) but also some indignation that he was not ‘TOLD’ really spoke volumes about US entitlement!

We finished the track 45 mins after the news report had ended ran off a normal cassette and walked down to the national radio station, 2JJ.

We told the on air DJ what we had done, and he playefd it (unlistend) to Australia 10 mins later. One of the best experiences of my musical production life.

Revisited some old REASON files from about 10 years ago. Its kind of interesting how the workflow and options of that program lead me to more experimental stuff than other DAW’s

I bought the Microfreak as a poly aftertouch controller and for its fun Arp/Sequencer. Over time Arturia just kept adding more and more features to this really rather boggling little synth.

Its internal sequencer,  timbral range and the fact it was 8 part multi timbral made it incredibly powerful and amazing value for money for the time.

All these years later I got to be glancingly involved in the design and testing of this recreation.

It sounds GREAT. and gave me a HUGE sense of DejaVue.

I count Pendle as a friend, but Seriously, don’t hold that against him.

with the ever charming Drew Mackillop

Got to this via the rather good  https://synthandsoftware.com/    site !

sort of a ‘KRELL’ patch from the micro freak

Really this is just about seeing what’s available in the new QuickSampler in LogicX, and as far as this tricks concerned, its pretty primitive compared to SOME of the tools out there, but given you can lock the loop lengths and start points to quantise values, it lets you do some fun stuff!

Start and Loop start to the same CC and Loops End to a second CC.

the frogs are complaining

with apologies to Jodie @FrogIDAus

*For No Fucking Reason

is a mesmerising art project, that also happens to be quite amazingly fun to make sounds with.

A little over two years ago… Its great what you can do with friends!

Going through my drive throwing various pointless experiments that I can’t even remember WHY I did them, out so …

Update: Sorry, im no longer giving this away.

Have real time control over the accent pattern on a repeating 16 step riff, allowing you to make it into a dynamic performance rather than a static loop.

The Riff keeps the relative position of the notes constant, while the Euclidean Rotator allows shifting the accent pattern to ‘pick out’  different notes in the 16 step pattern.

So it triggers every step

Now, use the Shift Sequencer to set up a repeating pattern you like

Now try lowering the Fill to a value of 10 and hear how notes in the sequence are now being picked out so only 10 of the 16 steps are being heard, note, the Sequence is still playing the same notes at the same point in the bar.

Now try altering the STEPS counter and the FILL amount and see how the Dynamic pattern now evolves over several bars, but the riffs notes are still positioned in the original point in the bar. (so you can have a set melodic pattern that rhythmically is shifting the accents)

Quick guide to the GUI below

1 Triggers the step rate of the Shift Seq

6 Triggers the rate of the Euclidean Rotator

1 controls a fast timbral sweep on the DWG

2 controls a slower timbral sweep on the DWG

3 Controls a change in the MIX of the DWG outputs

4 controls the Level of the LPG so can be thought of as the AMP ENV.

Mod-Wheel controls the Decay of the LPG and its output level and brightness, as well as changing the delay balance.  (signal will be heard if the clocks are running and Mod-Wheel is up)

To take things up a notch, use the RANGE controls in the Shift Sequencer to alter the octave and holds or notes to provide even more weirdness, or change the Shift Seq Clock rate, or…

“Wow, nice idea but I hate the synth” I hear you say?

Exploring the touch response of the MicroFreak. Tip of the hat to the boggling Jon Hassell.

All part of the 1 pass, no edits and 3 mins to make the sound series

It seems the NZ police are brilliant.

So, Sitting around Self Isolating …
Thought id teach myself Ableton LIVE

Made this track using its 909 kit and an Arturia MicroFreak.
Excuse the less than inspired drum part, got lost in the Synth:+)
To make things interesting, made some rules:
All sounds from Default on the micro freak had to be made in less than 3 mins and the parts had to be played in with no edits.

By request. the no crappy beats version, you can REALLY hear the bad playing now!:+)

for absolutely NO reason…

So continuing the pointless Squoinks…

Something caught in my throat.

Been playing with the @ArturiaOfficial #MicroFreak. Its FUN. Its Bonkers Fun.

Its quite an interesting cross between ya bog standard 1 Osc subtractive, and something more modular with some west coast elements. Consequently as a sad old synth geek, it’s quite interesting. The conductive pads that respond polyphonically are really what made me get this as it seems like an interesting controller for future projects regardless of its own synth engine. Anyway, its a hilarious machine for creating riffy ‘acid’ type synth loops. So I’ve been reliving my 90’s dance producer life, and wishing i’d had one of these back then.

From the very Wonderful Jeff Rona

“Modwheel’s new WaveSkimmer is a deceptively simple and incredibly powerful instrument. I am always looking for ways to add subtle movement and rhythms to my cues, and WaveSkimmer has pretty close to infinite sonic and musical possibilities. It’s helping me with my deadline right now!”

Noises to help decompress between flights.

Got tasked to make some samples useful in EXS24…

Decided to take it up a notch…

ALCHEMY is rather GOOD.

@bennjordan @NoiretBlancVie Having a prototype synth Marked fragile and Electronics. left halfway down a path exposed to rain was my peak ‘bad courier’ experience.

@markkilborn Fox will lose its mind when it discovers pantomime.

@InstrumentBot GPT: As the concept of an instrument made out of freshwater algae and a tame squirrel is not a common one and there's no information on how it would actually work, it's not possible to give a concrete answer.

@gingereejit from the Plague Ships

@nickdawg plug in my iPod?

@DevinMynett performative… vote hustle. Watch him revert to ExAuPM morriScum's I DONT HOLD A HOSE if he ever gained power.

@Moce_Doce Please send 3 dozen to the Address I will DM